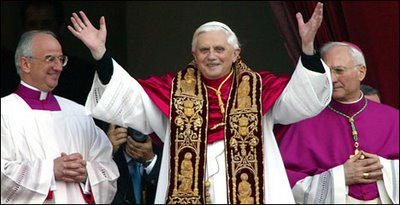 I just recovered from a chicken pox that made me stayed in bed for more than a week. Today, I was alarmed after reading Tempo --the newspapers that I've worked for in the last five years--. Its headline today is the picture of Pope Benedict XVI with capital headings 'Stop Anger'.

Interested, I read the story. My first reaction was that the Pope has nothing to blame of. I, instantly, relate the anger amongst many Moslems toward the Pope these days, to the Danish cartoon's incident last year and immediately made comparison. My initial thought was “Why moslems easily provoked by any remarks made by non-moslem about their religion? How can we start a productive dialogue if everything about Islam that comes from a non-Moslem thinking is always seen as provocative and denouncing Islam?”

Then after I read the actual sentence (not the whole remarks and the context), I started to understand why several Moslems feel angry and demand an apology from the Pope. I dont think its appropriate to labeled Islam as a religion of violence through a quote made by someone who live hundred of years ago (in this case; King Manuel II Paleologus). I thought the Pope has made a sloppy mistake, and I immediately related this sloppiness to his background as a staunch supporter of a purer catholic teachings as opposed to a more open minded Pope John Paul II.

But tonight, after reading several e-mails circulating among friends, blogs and online news websites on the subject, and after I got the chance to read the whole remarks by Pope Benedict and also the context where he said his controversial statement, I changed my mind again.

I now realise that the Pope has made a very smart move indeed. In fact, by his remarks, he theologically challenged any Moslem scholars to come up with an explanation that can really open a meaningful dialogue between faiths.

In my understanding, the Pope questioned something that has long been questioned by non-Moslem or westerners in general: (1) if Christian's God is limited within reason, is it true that Moslem believe that their God is completely and fully transendent?

(2) If Allah in Islam cant be explained within the frame of reason and completely beyon human capability to understand, then is it true that there is a possibility that an irrational act like a suicide bomb for instance-- has a chance of becoming an act that inline with God's wish and command?

(3) Then, if that is also true, can moslem accept that there must be a flaw in Islamic teachings, since it allowed an act that –from one perspective-- is an act that completely against humanity? After moslem accept it, do they have the ability to reform it?

I believe The Pope is trying to do something almost everybody else trying to do; find whether there is a gap of faith between Christianity and Islam that cannot be reconciled. If there is, then lets find the solution. If there is not, then lets stop this clash of faiths and move on to other practical issues of living together peacefully.

Based on that, I think Pope Benedict's remark opened a rare opportunity for Moslem all over the world to present itself and its beliefs properly, thus start a constructive dialogue between east and west.

By reacting with anger, violence and death threats, Moslem seems to show that Pope's allegedly derogatory remarks has a degree of truth. That kind of respond gives the Pope an upper hand since then he can show the world that Moslem are indeed unable to engage intelectually in a theological showdown. However, by answering smartly and addresing the basic question in Pope's remark, Moslems will somehow start a process of internal questioning and intropection since –needless to say-- many Moslem still believes that Allah cannot be questioned whatsoever and remarks such as the Pope's can be seen as a violation to one's faith.

Either way, the Pope win the day. That is why I believe the remarks was carefully crafted. Look at the place and date –its just one day after fifth anniversary of 9/11 and few days away from Pope's first visit to Turkey. This Pope knew what he's doing. Everything about the remark is designed to give ultimate impression and effects it expected.
Diposkan oleh Unknown di 9:31 AM 2 comments: